Level-up Your Scenario-Based Learning With VR 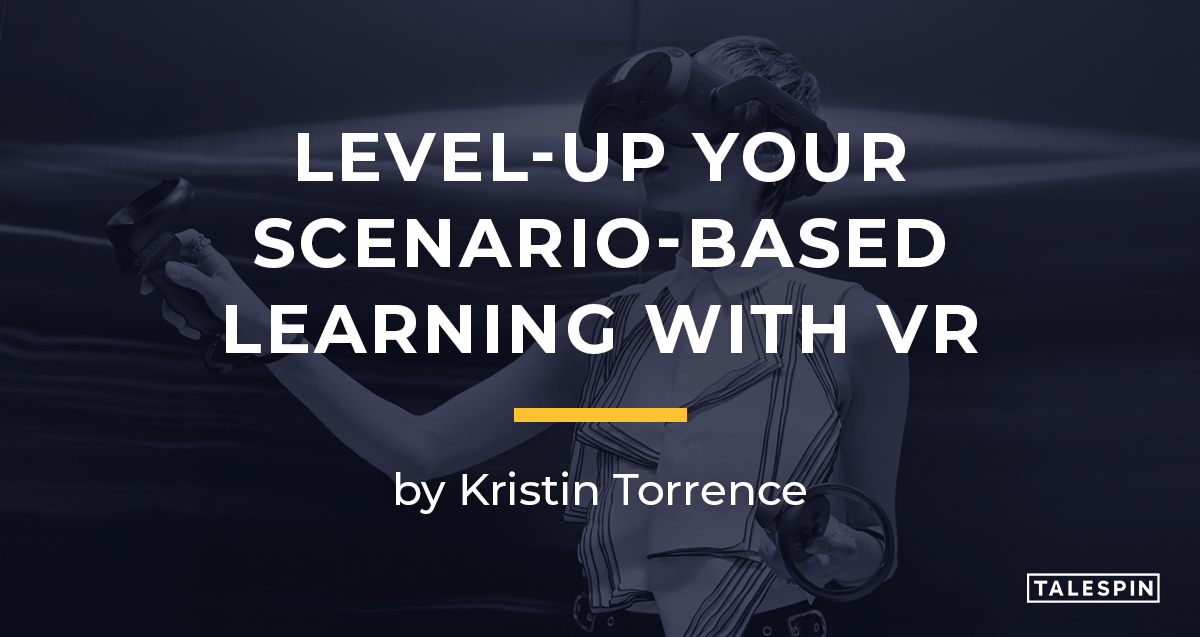 In this blog, we’ll compare and contrast the benefits of traditional scenario-based e-learning with scenario-based virtual reality (VR) training, and discuss reasons why you may want to consider adopting immersive learning technology for your scenario-based learning programs.

What is Scenario-Based Learning, and Why Should We Use It?

What is Scenario-Based Learning?

Scenario-based learning involves a learner playing an active role in moving a storyline forward within a learning module by making decisions about what should happen, or how to respond. This learner interactivity in turn impacts the trajectory of the storyline. In this way, the learner's participation has visible consequences on the scenario.

What are the benefits of Scenario-Based Learning?

The power of scenarios is that they take place within authentic contexts where learners are required to make decisions, solve problems, and navigate interactions with others. And with realistic context comes realistic consequences. Learning occurs through the process of making meaning of one’s experience while engaging in the scenario and drawing cause-and-effect relationships between decisions and outcomes. Best of all, the ability to backtrack or replay scenarios provides a safe place to fail, practice, and explore various decision options and their corresponding outcomes.

As mentioned earlier, scenario-based learning situates learners within authentic contexts. Traditional scenario-based e-learning does this through a combination of images and text, and sometimes integrating audio elements. On the other hand, scenario-based VR training fully immerses a learner within a virtual 3-dimensional space, tapping into sight, hearing, and touch.

‍Immersion is defined as the feeling of being totally absorbed sensorially in a VR system. Meaning, that the realism that VR imparts on learners takes learning within authentic contexts to a whole new level, nearly making it difficult to separate physical reality from virtual reality. The spatial affordances of scenario-based VR training deliver a more visceral learning experience than scenario-based e-learning has the capacity to convey.

Scenario-based learning in authentic contexts yields varying degrees of realistic consequences based on the chosen learning modality. With traditional scenario-based e-learning, the consequences, as they unfold within the contextual environment of the narrative, and the emotional impact are dependent on learners’ interpretation of visual imagery and narrative text used to deliver the message. This leaves a lot of room for variability.

Presence is defined as the perception of being in the place presented in the VR system. The sense of physical presence may also heighten the emotional impact that engaging with realistic virtual humans has on a learner. This is potentially due to the fact that as learners participate in scenario-based VR learning experiences, they are likely doing so from a first-person perspective. Instead of responding with what someone should do in a fictitious situation, the learner decides what they themselves should do in a situation. VR learning experiences make the learner active participants in the conversation, requiring them to decide what dialogue they should vocalize while addressing the virtual characters in the scenario. Because learners physically, cognitively, and emotionally play the role of a person situated within a storyline, they may feel greater buy-in because they have a stake in the game.

In VR, the learners’ autonomy and the freedom to choose how to interact within the VR environment with virtual human characters promote greater investment in the outcome of their interactions. This is because of the direct consequences they physically, cognitively, and emotionally experience as a result of their decisions and actions.

When learners are roleplaying in traditional scenario-based e-learning, the scenarios are often framed from a third-person perspective. They learn about a fictitious character - let’s call them Character A - and Character A is faced with a problem that they must work through to resolve the situation they are facing. The choices are framed in such a way that learners are asked how Character A should respond. Scenario-based learning from a third-person perspective reduces the amount of realism compared to a first-person perspective. You can imagine that the farther you are removed from a situation, the easier it is to be objective and unswayed by emotions. Thus, you may be more apt to be analytical with your decision-making, choosing the “best” answer, even if it’s not how you might actually respond in real life. On the contrary, the embodied nature of scenario-based VR learning may promote more authentic responses, consistent with your natural behavior, minimizing any cognitive dissonance that a learner might experience.

Branched narrative in e-learning and VR modalities has its own limitations and can impact a learner’s perceived sense of autonomy during scenario-based learning. In traditional scenario-based e-learning, the branched narrative structure is quite salient. Typically, the learner is introduced to a scenario context and is exposed to a decision point with various response options - choosing one triggers more information to be shared (visually or by text) about the scenario as a result, and the learner is again asked to make another decision. Awareness of the e-learning branching structure of the scenarios and subsequent response options can reduce the sense of realism, because knowing that branches are predetermined can diminish one’s perceived autonomy.

When it comes to scenario-based VR learning, the branched narrative is veiled behind the presence, immersion, and interaction within the VR environment. The learner may very well be subject to a predefined set of pathways, but because of the experiential nature of VR, these branches may not be as obvious because they’re seamlessly woven into the VR experience. In essence, the learner is seeing the narrative unfold firsthand. This lack of awareness of the branched narrative structure can impart a perceived sense of freedom and autonomy when acting within the VR space.

When designing for scenario-based VR learning, the amount of time spent reading is not as much of an issue because the dialogue is often supplemented with a virtual human’s voice-over audio. What that does mean is that audio dialogue must be clear and concise enough for a learner to easily comprehend when it’s delivered to be able to respond accordingly. Where VR designers must be mindful is structuring the scenario-based activity in such a way that maximizes a learner's time spent in VR, and delivers content in a fashion that does not cause physical or perceptual fatigue.

The level of engagement a learner experiences in a learning scenario, and the ability to mitigate distractions differs between e-learning and VR. With scenario-based e-learning, it’s easier to disengage because learners are susceptible to external distractions within their physical environment. While scenario-based VR learning has full control of all of the learner’s visual, auditory, and sometimes tactile senses, which helps to mitigate distractions by reinforcing an immersive story even at points where attention may wander away from the target area. Some may say that more effort is exerted in taking off the head-mounted display (HMD) than staying in it. For example, PwC’s VR study mentioned above found that VR-trained employees were 4x more focused during training than their e-Learning peers.

Traditional e-learning: 2D constructed with a combo of images and text (sometimes audio)

Branching Narrative and Sense of Autonomy

Traditional e-learning: Branched narrative is salient, which reduces the sense of realism. Knowing that branches are predetermined can diminish one’s perceived autonomy

Virtual reality: Branched narrative is veiled behind the presence, immersion and interaction within the VR environment, which imparts a perceived sense of freedom to explore various paths

Traditional e-learning: Susceptible to external distractions in the physical environment, making it easier to disengage

Virtual reality: Full control of senses, which reinforces the simulated environment. More effort is exerted in taking off the HMD than staying in it

To bring your learning programs to the next level, check out the Talespin blog for further analysis, updates, and Metaverse intel.